Anti radar paint for cars is a type of stealth coating which is used to prevent a police laser gun from effectively determining the speed of a vehicle, or to prevent speed cameras, red light cameras, and photo radar from capturing an identifiable image. These products do not make your vehicle invisible from laser guns and radars, instead they use different mechanisms to either reduce the effective range of the laser gun (giving you an extra 5-10 seconds to reduce your speed) or to make your licence plate extra reflective so cameras cannot capture an image.  In Canada, photo radar cameras are not used in all provinces – Alberta, Manitoba, Saskatchewan, and Quebec all use these automated speed enforcement measures, and provinces such as British Columbia are looking at upgrading their red light cameras.

Note: The use of these products is not a licence to speed nor do we advocate or condone speeding.

In this article we look at anti radar paint and licence plate blocking sprays, how they work, if they work, and what Canadian drivers need to know.

So how does anti radar paint for cars work?

Depending on whether you purchase a product to obscure your licence plate or to interfere with the functioning of a radar, these coatings behave in different ways. Below we outline the difference for you.

Both police laser guns (LIDAR) and radar guns (RADAR) use electromagnetic waves to detect the speed of a vehicle, but the mechanism is slightly different.

In the case of both the LIDAR and RADAR devices, an anti radar paint works by absorbing the electromagnetic waves used for detection. The coating makes surfaces less reflective and, the idea goes, prevents the device from receiving enough of an echo to get a reading. Lighter coloured cars are naturally more reflective than darker ones and even with a laser absorbing paint or radar absorbing paint, car colours have some influence.

If you don’t fancy coating the reflective surfaces of your car in order to pass undetected by the radar guns, there is also the photo blocking spray that blurs out information on licence plates so no identification can be made. This spray (known as PhotoBlocker) goes on clear so that it can’t be seen with the naked eye, but when a photo radar device detects a speeding vehicle and takes a photograph, the spray reflects so much of the flash that the licence plate just becomes a white blur. These products require the photo radar, red light camera, or speed camera to use a flash to be effective.

Mythbusters and others have put these stealthy coatings to the test…

…And the results are mixed. The LIDAR systems used by police laser guns are incredibly accurate and difficult to fool. As far as radar absorbing paint, the jury is out. These coatings are not exactly military grade stealth protection. Photo blocking paint on the other hand does work, as shown in the video below from an American news station.

Photo block and anti radar paint in Canada – is it illegal?

In short: Yes. Although it is perfectly legal to buy an anti radar paint or a photo blocker paint in Canada, if you apply it to your car you will be breaking the law. There are two articles in the Canadian Highway Safety Code which relate to obscuring a licence plate: Section 333 which prohibits the use of any material capable of interfering in any way with the operation of a radar device,  and Section 334.1 which gives a peace officer the power to remove, or require the removal, of any object or material at the expense of the owner of the vehicle. Anyone caught using such a product will find themselves receiving a fine of up to $500. 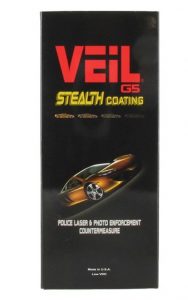 How to apply a radar absorbing paint/photo blocker spray

There are several of these products available for Canadian customers, sold through websites like Buyradardetectors.com.

Veil G5 is a greyish liquid paint applied to laser targets on a vehicle such as the highly-reflective license plate, headlights, fog lights, turn signal lights and the grill. Veil is marketed as a radar and laser absorbing paint, intended to reduce the effective range of a laser and give a driver extra time to react. Enough Veil is included to cover three full applications and it is applied like any other paint. The formulation is undisclosed.

A photo blocking spray such as PhotoStopper or PhotoBlocker is a simple spray application that makes your licence plate extremely glossy. One can will cover 4 licence plates with the recommended 3-4 coats, and the manufacturers claim it will never wash off.

Where to buy anti radar paint in Canada

The most famous radar absorbing paint for sale in Canada is the Veil Stealth Coating G5, and for reflective sprays it is PhotoBlocker, available at various webshops like Buyradardetectors.com and Photoblocker.com.

We at Coating.ca do not condone or advocate illegal activity.