Want to fly from Vancouver to London under 3 hours? This new coating might do the trick for you.

The development of a new kind of ceramic capable of resisting insanely high temperatures would eliminate a major obstacle blocking the path to hypersonic air travel.

There are plenty of potential uses for a material that can deal with temperatures of 3,000° Celsius (about 5,400° Fahrenheit), especially on military and space technology, but anything that will get us across the globe in the time it takes to watch three Game of Thrones episodes has our attention.

Researchers from the University of Manchester and Central South University (CSU) in China have designed a ceramic coating that resists two of the biggest problems caused by exposure to high temperatures – ablation and oxidation.

Expose any material to a high enough temperature and its molecules will jiggle loose and fall off, especially if they’re being scoured by high speed particles speeding by. That’s ablation. The second is the souped up reaction with oxygen changing the molecular structure, called oxidation.

For an aircraft to move at hypersonic speeds and not arrive toasted, you’ll want to protect its components against the high temperatures caused by air compressing and rubbing against parts of its structure, especially its leading edges. Those temperatures could potentially reach 3,000°C (5,400° Fahrenheit) at speeds considered hypersonic, between 6,174 and 12,348 kilometres per hour (3,836 to 7,673 miles per hour).

Getting passengers from London to Vancouver in about 3 hours would revolutionise travel, and is a dream that some say could be achievable in the next decade. 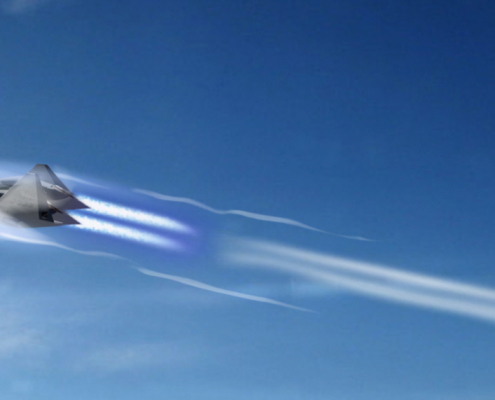 Many technical problems still need to be solved:

Putting aside arguments on whether it would be commercially viable, especially with memories of the Concorde still fresh in our minds, that pesky temperature problem would be just one of the many technological issues in need of a solution.The current answer would be to cover them with ultra-high temperature ceramics(UHTCs); solid non-metals that stay stable at temperatures over 2,000° Celsius(about 3,600° Fahrenheit).

One UHTC commonly used to coat drill bits, engine parts, and sections of supersonic vehicles is zirconium carbide (ZrC). Another promising candidate for high temperature coatings on aircraft would be its cousin zirconium diboride (ZrB2), which not only resists oxidation at temperatures up to 1,500° Celsius (2,700° Fahrenheit), but has low density and is relatively low cost.

Unfortunately, the boron in ZrB2 makes it susceptible to ablation when the boron atoms do oxidise, and if a single section of the material happens to fail, it does so catastrophically.

Not exactly what you want zooming through the air at Mach 5.