The solar energy dream is to have high-yielding solar cells that are so versatile and easy to apply that they become a ubiquitous part of everyday life, powering our world from every surface. That dream may be getting closer, with companies and scientists developing new solar cell and solar panel technologies which inch nearer and nearer to a sustainable technology revolution. One such development is the solar window coating from SolarWindow Technologies, a liquid polymer coating which forms ultra small solar cells. Meanwhile Canadian researchers in Toronto and Alberta have come up with innovative spray-on solar coatings.

In this article we look at solar coating technologies and how they work, including some homegrown innovations from Canadian Universities and researchers.

SolarWindow Technologies invention is understandably kept largely under wraps, but what we do know is this: The solar window coating is a liquid polymer coating composed of hydrogen, carbon, nitrogen, oxygen and some other mystery ingredients which form tiny solar cells and arrays (called an “organic photovoltaic solar array”). These cells absorb energy from light which is then harvested and directed by tiny wires running through the coating. What differentiates this coating from other solar cells is that it is transparent – it be applied as a solar coating to windows and leave only a slightly darker tint, not disrupting to the eye.

With these properties it is no surprise that the main application of this coating, as Solar Window Technologies sees it, is skyscraper windows. The coating can be applied to all sides of a skyscraper, harnessing the productive power of acres of glass and turning the tower into a renewable energy source. The windows will still look just like windows, but really they are window solar panels, working to provide renewable energy to the building, cutting energy costs and CO2 emissions.

The benefits of solar glass windows

Turning a window into a solar panel is not just a breakthrough for coating technologies, it has other benefits too. Some of these benefits include: 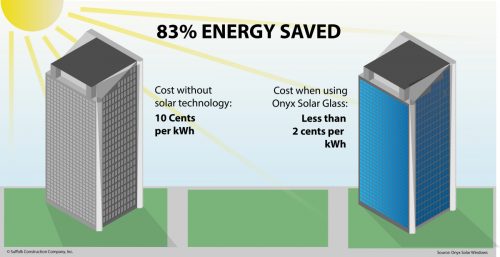 Researchers at the University of Toronto have developed a new kind of spray-on solar cell which outperforms previous installments of the coating. This coating uses colloidal quantum dots (CQD) to absorb solar energy. CQDs are nanoscopic light-sensitive materials which do the same job as other solar cell materials but are far more ‘tunable’ – their size can be altered to pick up specific wavelengths. What this means is they are highly efficient. The University of Toronto researchers have created CQD that can be sprayed onto flexible surfaces such as film or plastic, which makes the process much simpler.

The University of Alberta team created nanoparticle solar cells that are silicon free and extremely light and flexible. Made from cheap component materials such as zinc, this research could lead to cheap, spray-on solar cells that could be applied to a range of surfaces.

Solar energy research is a booming area in a world where replacing fossil fuels is of paramount importance. The current wonder material is perovskite, a crystalline substance with a number of interesting properties such as superconductivity. In particular, perovskites are being used to create highly efficient thin-film solar cells. They can be mixed into liquid solutions and used like a spray-on coating, freeing solar cells from requiring rigid structures such as the current solar panels. While there is a lot of research yet to do, a version of the perovskite technology could become commercially available sometime in the next year.

With the amount of exciting and viable research and development coming out of the solar coating field, it is feasible to believe (as many scientists do) that these technologies will come onto the market as soon as the end of 2018. It may not be quite that soon, but the next few years will see a spate of new forms of solar cell innovation that could revolutionise how we create and consume energy.